Holy shit, what a year! All I can say is that there is no way I can possibly pick a 'favourite' release, because there was way too many to choose from - instead I opted for a ten best system for both EPs and LPs. Anyway, here we go!

Prurient and The Rita - Women Pissing

Back with a new vocalist, IDYLLS released this earlier this year - showcasing a decidedly more dissonant and raw side to their mathcore/grind chaos. Best described as the Birthday Party on methamphetamine, this 4 track EP had a killer cover of Lubricated Goat's 'Beyond The Grave'

Raspy, unhinged grindcore decimation of three-piece Sara Stain. I gotta say, this is probably the most underrated grind release of this year - straight forward grinding hardcore energy that refuses to let up. Loved it.

Bad People are doing modern hardcore right - taking influence from the old, injecting it with the new and putting it through the wringer to add their own unique lean on it. Snotty vocals, power chords and nods to everything from surf rock to psychadelia,  not to mention that members of the band are (and were) also in Brown Sugar and White Guilt.

Powerviolence inspired hardcore from Brisbane, Australia. Absolutely ferocious metallic fury that just sucker punches you right in the face. Mark my words, these guys will be right up there with the likes of Extortion and Suffer.

Two bass heavy (and only) sludge bands delivering the goods. No Anchor's final release before their untimely demise (RIP) is a delightful concoction of alternative and noise rock, coated in a layer of concrete while Dead's contribution is a primal raw chunk of progressive sludge metal. 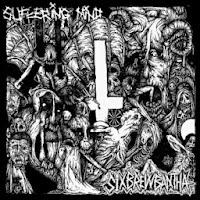 Utterly pummeling grindcore Poland/Canada. These two bands mince it up like there's no tomorrow. Specials props to Six Brew Bantha for one of the best snare tones ever committed to wax.

This killer, two song EP unleashes more of Dope Body's off kilter, alt rock tinged noise rock on the world. 'Leatherhead' is a sleazy, slow burner with this year's catchiest bass riff, while 'Youth Relic' catapults you right into the action, with frantic drumming and a bright, energetic guitar riff. It's pretty tame as far as noise rock goes, but it's an absolutely killer EP.

Cold Cave - Nausea, The Earth And Me

Wes has released a slew of EPs and singles this year - God Made The World, Oceans With No End, Black Boots and this three track EP (very recently actually). A decidedly dark affair, there are definite nods to goth, early EBM and of course, dark wave.

Column Of Heaven - Holy Things Are For The Holy

Face it, you've already given up trying to classify Column Of Heaven. The powerviolence? band have more than a few experimental releases under their belts, this being their latest. Industrial meets noise rock meets power electronics meets doom metal dirges and everything in between. It's weird, it's creepy and I love it.

Iron Lung Record's consistently brilliant output continued in fine form this year (Society Nurse, Column Of Heaven, Hatred Surge etc etc), but I'm gonna have to say that this here was probably my favourite of their's this year. Dreamdecay play a spaced out, trippy amalgamation of noise rock and shoegaze where everything is drenched in a layer of reverb and delay. At times N V N V NV sounds like the album Ennio Morricone would've written if he was tripping on acid and on a serious Sonic Youth fix - quiet, dissonant passages that build up to massive cathartic crescendos that dissolve into full blown noise freak-outs. I am super excited to hear more from these guys.

Speaking of Iron Lung Records, guess who else put out a really fucking good album this year? I'd probably say this was my most anticipated album for 2k13, and I was not disappointed. The two man powerviolence powerhouse fully realized their industrial fetish in what was essentially a three in one album. Their claustrophobic, medical themed pv met with an 22 minute long, Eraserhead-esque noise accompaniment, which was not only an amazing stand alone track but a re-interpretation of the album, that could be merged with the existing tracks. That unique concept, coupled with Iron Lung's outside-the-box song writing made 'White Glove Test' a formidable release.

Well, sort of. Sydney band Zeahorse know their way around a heavy song - feedback, drones, riffs et etc but they also know a thing or two about pop sensibility. 'Career' and 'Pools' are two massive songs, tamed only by a soothing, dreamy vocal performance, whereas 'Onion' is a straight -forward garage punk jam and 'Familiar Faeces' or 'Tugboat' have a more subdued indie vibe (and then there's the bluegrass wildcard 'Junktown Train'). All in all, it's a heavy album, with intense sonic vibes, albeit one that knows how to behave itself once in a while.

Margaret Chardiet's solo project, Pharmakon, is a force to be reckoned with. The NYC native unleashes some cold, calculated industrial noise, led by her demonic screeches and almost obsessive attention to detail. Unlike the the greater portion of the noise scene, Pharmakon forgoes improvisation in favour of impeccably composed tracks. Every synth pulse, clatter, screech and percussive blast is exactly where Chardiet wants it to be - and that is why this album stands out from the rest of 2013's noise catalogue.

The Pennsylvanian noise-mongers that are Pissed Jeans are at it again with album number four. Abrasive, scuzzy and deadpan as ever, Honeys not only covered the usual noise rock/punk/hardcore bases but touched on 90s alternative rock, grunge, harsh noise and drone/doom (check out Chain Worker). Not only this, but it gave us 'Bathroom Laughter' and absolute rager of a track that was probably my favourite song of 2013.

Okay, I lied. Sunbather's opening track 'Dream House' was my number one pick for top song of 2013. It was utterly perfect - the grandiose guitar work, the ferocity of the vocals, the beautiful lyrics and the amazing drumming. All of these qualities carried on through the album, gracing many ears last year with the post-rock/shoegaze/black metal sounds that make up Deafheaven. There's a reason this appeared on so many end of year lists, there's a reason why so many people went apeshit over this album - and it had nothing to do with it being over-hyped. It's just really fucking good.

Rather than pilfering from the Boston/New York cica 80s hardcore scene (something most HxC bands do nowadays), Broken Prayer looked to the fucked up sounds of SST, No Trend and Die Kreuzen and added their own ecclectic flair and then out popped this album. Off-kilter would be a place to start when describing this album, but it really doesn't do it justice. Bratty vocals, synth, whacky riffs and a general disregard for the punk rulebook made this a favourite. It's a refreshing take on hardcore, and I really hope to hear more from these Chicagoan rapscallions in the near future.

Prurient - Through The Window

Building on 2010's amazing 'Bermuda Drain' and Fernow's other synth/electronic projects (namely Vatican Shadow), Through The Window is a love letter to European Techo, coated with Prurient's darker than black allure. Pounding bass and repetive synth lines dominate the title track (it takes up a fair portion of this release at 17 minutes), 'Terracotta Spine' is reminiscent of the 'Cocaine Death' era and 'You Show Great Spirit' sees a return to minimalist electronica. Through The Window demonstrates masterful use of ambiance and atmosphere, lending this release a cold, clinical vibe that may be considered 'harsh' in its own way.

Full Of Hell - Rudiments Of Mutilation

Hardcore's scariest band have managed to get scarier, somehow. Embracing their noisier, more chaotic side (a la Discordance Axis), Full Of Hell dropped 10 tracks of pure fucking rage on this LP. Rudiments revisited old favourites (Vessel Deserted), explored experimental territory (Dichotomy) and went full bore on pretty much everything else (Coven Of The Larynx being a stand out). It's been cool seeing the band evolve, and if this LP is anything to go off, we'll be seeing a much more darker and meaner Full Of Hell in the future.

Toby Driver and his merry band of misfits are at it again. Hubardo saw the return of former Maudlin Of The Well vocalist Jason Byron, as well as a more concentrated, composed direction. Kayo Dot's wonderful fusion of metal, post rock, jazz, 70s rock and everything in between is still there, as melodramatic and grandiose before, but unlike their previous few releases, it's more structured and less cacophonic. It was a good year for metal in 2013, but Kayo's avant-garde powerhouse come out tops for me.

Email ThisBlogThis!Share to TwitterShare to FacebookShare to Pinterest
Labels: Best of 2013