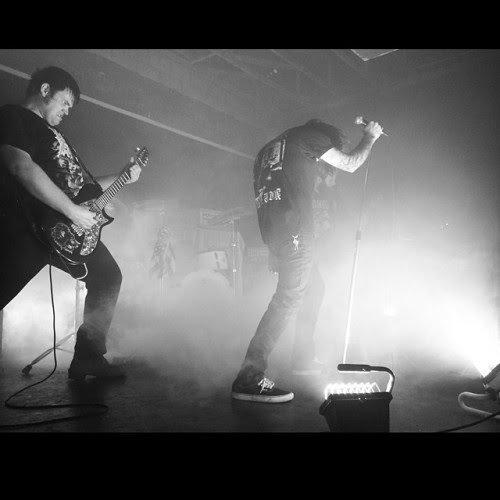 In addition to reviewing these guys (scroll down, you'll find it), I also conducted an interview with 'head coach' Chase Mason to find out more about the band, his stance of Swedish DM worship and how much technical death metal sucks.

FBN: First of all, who are you and what do you do?
Chase: My name is Chase and I am the head coach of Gatecreeper.

FBN: 'Gatecreeper' is a delightfully awful pun, but does it have a deeper meaning?
Chase: No, it does not. I liked the name and had it bouncing around in my head for a year or two before we even started the band. It wasn’t until I googled it to make sure that it wasn't already taken that I found out it was a Magic: The Gathering card.

FBN: How did the band come to fruition?
Chase: I had initially met Matt, our drummer, through mutual friends and quickly bonded over our similar taste in death metal. We were talking about much we both liked Dismember’s Massive Killing Capacity album and decided to start a band in that style. Eric, our guitar player, was Matt’s roommate at the time so we all teamed up and immediately started writing. I was living in Phoenix and the other two were living in Tucson, which is about 2 hours away, but we took trips back and forth every other week and made it happen. After the three of us had finished our first batch of songs together, we enlisted our friends Sean and Max to play bass and second guitar.

FBN: Your debut, self titled release came out a few months ago - tell us a little about the writing and recording process for that?
Chase: At the time of the recording, we weren’t even a full band. We had written those 4 songs with Matt on drums, Eric and I both playing guitar, and no bass player. Since we live in different cities and weren’t able to get together as often as we would have liked to, we would record demos of song ideas and send them back and forth to each other. When it came time to record, Eric and I both handled the guitar and bass duties.

The EP was recorded by our friend Ryan Bram at Homewrecker Studios in Tucson, AZ. Not only does Ryan play in another band with Matt, but he also has a solid understanding of what kind of sound we are going for, so it was a no-brainer to record with him. Ryan is really good at what he does and we were all on the same page as far as what we wanted for guitar, bass and drum tones so everything went very smoothly. We took about 4 days in the studio spread out over two weekends to finish the recording and then sent it to Brad Boatright at AUDIOSIEGE for mastering. We are all extremely happy with the way it turned out.

FBN: This might be a dumb question, given that you're a death metal band, but I'll bite anyway: what sort of themes do you explore in Gatecreeper's music?
Chase: A good portion of the lyrics on the EP are about addiction and the apathetic feelings that come with it. This may not be very typical subject matter for a death metal band, but I believe that the demoralization and pain that comes from prolonged substance abuse is just as dark, if not darker, than any gory horror story I could write. I try to stick to what I know and have had personal experience with.

FBN: What are the biggest inspirations to the band, musically and otherwise?
Chase: We try to focus on the riffs and the groove. All of the great Swedish bands like Dismember, Entombed, Grave and Unleashed all had a groove to them. We try to take that obvious Swedish influence and mix it with other classic bands like Bolt Thrower and Obituary. More recently, we have been incorporating doomier and more “melodic” elements that are inspired by bands like Hooded Menace or early Amorphis. We are not going out of our way to do something that hasn't been done before, we are just taking the sum of our influences and writing songs that we want to hear.

FBN: There's been a pretty noticeable rise in bands channeling the 'Swedish Death Metal' sound. Why do you think this is, and what drew you to the genre?
Chase: Well the HM-2 guitar tone is definitely the most recognizable, but the songwriting of all the classic Swedish bands is what really grabbed me. I think the main reason why bands have been channeling that sound, whether it's metal bands or hardcore bands, is because it involves injecting a certain amount of catchiness, groove and melody into a genre of heavy music that is oftentimes dull and flavorless.

FBN: In my 'professional' opinion - technical death metal, save for a few bands, sucks. Kids should put down the 15 string guitars and take death metal back to its ugly, primitive roots. What is your relationship with the technical side of the genre?
Chase: I've got a very similar relationship with it. Suffocation is the only "technical" band that I can think of off the top of my head that I can say I'm a huge fan of. We will never write anything that would be considered “technical” or “progressive”. We write GED riffs.

FBN: What would you say are the three most underrated death metal bands of all time?
Chase: Carnage, Cemetary, and Interment.

FBN: 10. Last of all, any shout  outs or thank yous you'd like to share with the web?
Shouts out to Take Over and Destroy, Territory, Seas Will Rise, Chamber, SUV, Sovereign, Kashyyyk, North, Sex Prisoner, Goatprayer Records, Crown and Throne, Dillon Vaughn, JGA, Ando, Bram, Brad Boatright, Ms. Wagner, my woman Michelle and my dog Bodie.

Big thanks to Chase for the interview. Again, if you use that odd little wheel on your mouse, or your finger to swipe down you should be able to see the review I wrote for these guys. No? Don't want to? Okay, well here's the bandcamp link, RIGHT HERE
Posted by Unknown at 04:10