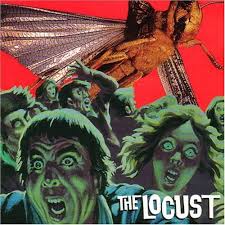 I've tried, on more than one occasion, to classify The Locust's music into one, easy to understandable genre. So far I've come up with math-infused-dance-grind, and even then that doesn't really seem to do it justice. Basically, The Locust have created their own, silly little niche genre, and holy shit do I love it. 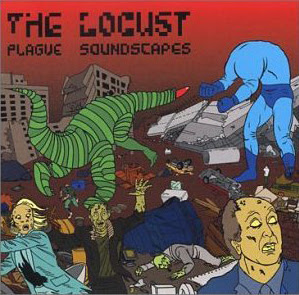 The Locust essentially started out as a Man Is The Bastard clone back in 1994, and while their self titled album is still clearly influenced by the 1990s grind/powerviolence scene, it also shows the beginnings of their trademark weirdness. The synths in 'Moth Eaten Deer Head', or the groovy little breakdown in 'The Perils Of Believing In Round Squares' are little nods to the madness to come, while tracks such as 'Cattle Mutilation'  are pure grindcore ragers.

I'm not going to lie, Plague Soundscapes is probably one of my favourite albums ever, hands down. This album is crazy in every department: lyrically, musically and thematically - hell you can take one look at the album art and see that something's not right. The synths have a stronger presence on this album, so not only do you have very violent and unpredictable album - you have a violent and unpredictable album that is surprisingly easy to dance to. The Locust's unique, three vocalist approach is at its best on this album too, everything from screaming, mid ranged hardcore shouts and Justin Pearson's sassy delivery (can he do anything other than sassy??) to batter your eardrums senseless.

If you've come this far in your musically journey, and you have not listened to the Locust, you are doing something wrong. I recommend you download these albums now, and listen to them repeatedly as you'll need multiple listens to be able to wrap your head around the sheer lunacy that is The Locust.

Kill Rodger Hedgecock
Live From The Russian Compound
Posted by Unknown at 02:14