The Mummies - Play Their Own Records 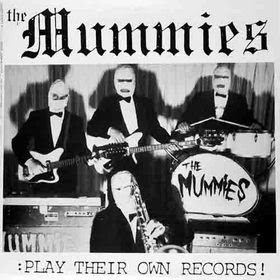 Genre/s: Garage Rock, Punk
For Fans Of: The Trashmen, The Troggs, The Reatards, Urinals

The Mummies were champions of the modern garage rock revival, and also one of the most literally named rock groups in musical history (as in they dressed as mummies when they played live). Influenced almost exclusively by the sounds of the 1950s, especially rock and roll and surf music, The Mummies played what can only be described as B-Grade Garage Punk. Adding their own sloppy, devil may care touch to garage rock, The Mummies played loud (and sometimes fast), with deranged vocals, tinny guitars and some pretty groovy organ lines to boot.  This here is a collection of the band's earlier singles, compiled for your listening pleasure - and it shows The Mummies at their finest - a bunch of young punks playing rock and roll horrendously.