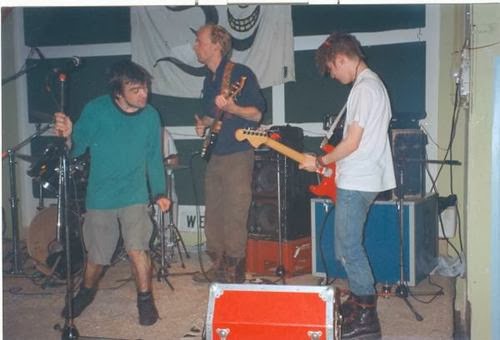 For most, post punk conjures a rather gloomy, downtrodden atmosphere. Perhaps you think of Joy Division, or Bauhaus, or even The Cure? Well take off your eyeliner and your trench coat, because where you're going - that's frowned upon. Whirling Pig Dervish were a bunch of young rapscallions from Scotland who were making some rather odball post punk music well after the initial boom in the 1970s. Throughout the early 90s, Whirling Pig Dervish managed to release a full length and a 7", full to the brim with their angular, noisy take on the genre. Sometimes delving into more punk/hardcore territories (especially on their full length), WPD maintained a consistently weird approach, throwing odd time signatures around like no one's business and dropping in some trumpet for good measure. This is some criminally underrated stuff, and should appeal to anyone who likes some deliciously fucked up punk.

Full Leather Lovesuit
1. A Question Of Sport
2. Fatter Richer And Stupider
3. Whip
4. Erectile Projectile? (One Flew Over The Cuckoo's Nest)