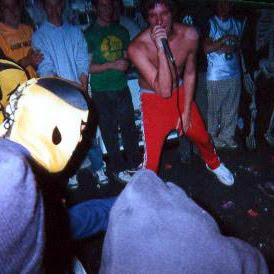 BEFORE THEY WERE PISSED JEANS and BEFORE THEY WERE THE GATECRASHERS, they were THE ULTIMATE WARRIORS (well most of them anyways). Probably the only wrestling themed grind/pv band, The Ultimate Warriors put out some hilariously goofy, but utterly brutal stuff in their 6 years as a band. Despite the considerable distance between California and Pennsylvania, The Ultimate Warriors would've fit right in with the 'dankcore' scene, with their slamming riffs, guttural lows and ridiculous high pitched shrieks, screams and yelps. This is utterly essential listening if you're a fan of grindcore or powerviolence, so do yourself a favour and give this a listen.