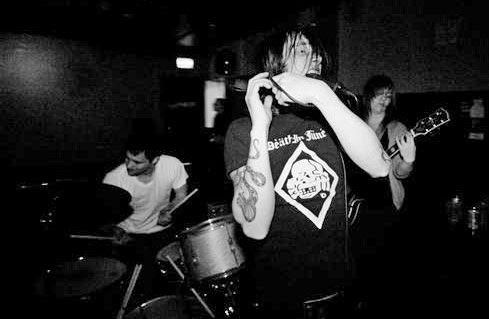 Drunkdriver were a New York band who played some of the noisiest, most abrasive hardcore you're ever likely to hear. Alas, their time on the planet was short, but they left behind some absolutely killer music, coated in at least fifteen layers of distortion. Drunkdriver were a band that could alternate between breakneck speed and oppressive sludge drawls, harnessing unhealthy amounts of guitar feedback and noise in the process. With vocals that posses a Mike-Williams-IX-rant crossed with deranged mental patient quality, dosed with ungodly levels of reverb (what's a noise punk band without reverb), Drunkdriver is just an all out assault on the senses, with little to no regard for conventional song structures or musical convention.  Unfortunately these guys (and gal) left us waaaay too soon, due to some sexual assault allegations leveled at the drummer, but their discography is up for grabs below (inlcuding their collaboration with noise/experimental artist 'Mattin'), so jam it loud and scare some kids and/or old people.

(Edit: I fucked up and left some tracks out of the initial ZIP folder, hence I have added a second file with the missing tracks)

My Chinese Sister
1. Warm On The Inside
2. To Whom It May Concern
3. Look Back And Laugh

Drunkdriver/Mattin
1. Side A
2. Side B